For those living in major cities, air pollution is a serious problem. In some cities, such as Beijing smog can make it dangerous to go outside.

According to the World Health Organisation (WHO) 92 per cent of the world’s population were living in areas where guidelines for air pollution weren’t met as of 2014. They also suggest 3m premature deaths in 2012 could be attributed to ambient air pollution.

The biggest air pollutants, according to WHO are particulate matter, ozone, nitrogen dioxide, sulfur dioxide, and carbon dioxide. WHO say that these can lead to ‘stroke, heart disease, lung cancer, and both chronic and acute respiratory diseases, including asthma.’

WHO recommend that people get no more than 10μg/m3 in particulate matter in a year. Most cities in the world have so much particulate matter in their air that the average person would breathe far more than that in a year. For example, Londoners breathe 15μg/m3 per year. In Paris, that figure is 18μg/m3. But these figures pale in comparison to some of the world’s biggest cities. In Beijing, it’s 85μg/m3 and in Delhi, India, the figure is 122μg/m3.

The following chart displays the places in the world where air pollution is a real problem: 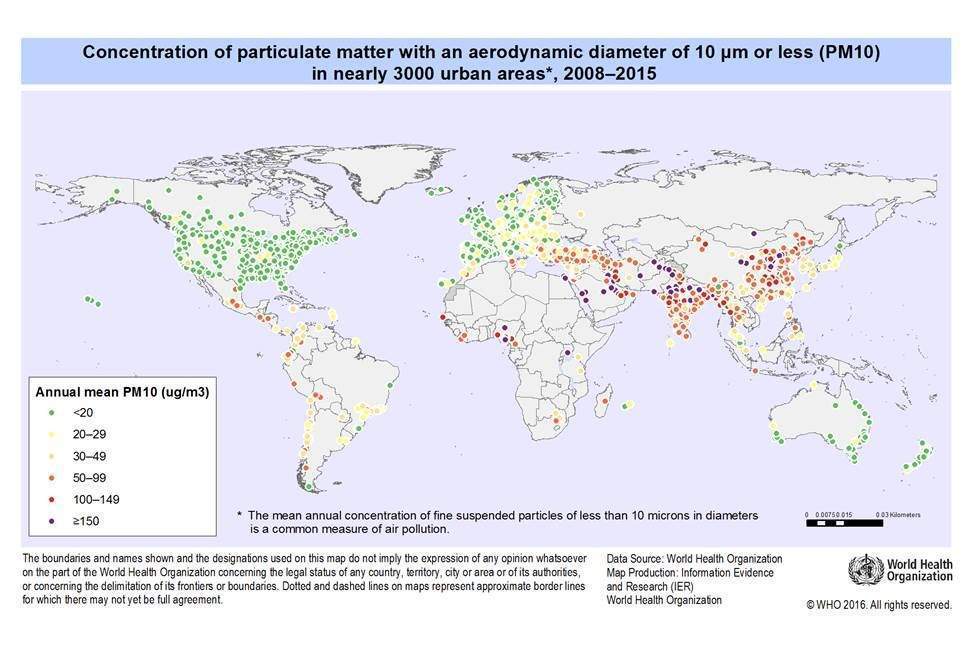 Thankfully, though air pollution is a serious problem, there are also solutions to the issue.

However, for the purposes of this article, we’re looking at solutions to outdoor air pollution.

Personally though, there are ways to alleviate the impact of air pollution.

Be aware of pollution levels:

One of the most important things to do to protect yourself from the harmful affects of air pollution is to be aware. Most weather channels and apps also show air pollution levels. At times when air pollution is high, it’s best to avoid locations where pollution builds up, such as busy roads. It’s also worth avoid strenuous outdoor activity that will see you breathing a lot. Finally, try to avoid rush hour by departing a little earlier or later if possible.

There are also various air monitors you can buy yourself, which update in real time. One device that’s generating lots of buzz is Plume Labs’ Flow device. This device can be attached to a bag or coat and tracks air quality wherever it goes. This data is then uploaded onto an app which will create a real-time map of air pollution based on users’ data. The device can be preordered here and will ship in June 2018.

While cycling and walking, it’s best to avoid busy roads. The vehicles on these roads tend to release huge amounts of particulate matter, so taking a back road or a quieter route can be helpful.

For those who have to venture out in polluted air, it’s best to wear some kind of mask. There are dozens of masks on the market, so it’s worth looking into which is the best option for you.

The market leader for anti-pollution masks is Respro. They claim that their masks are N99 which means they filter out 99 per cent of airborne particles. Their range includes masks as well as scarves. There are, however, numerous other options available. It’s recommended trying them on in store to get a mask that fits properly.

For those who don’t wish to wear a full face mask, other options are slowly arriving on the market. One of these is PerSapien’s Airlens. These are essentially nasal plugs that filter air as it enters the nose. They were developed by scientists at the Indian Institute Of Technology and received much acclaim when they were first unveiled. They are also accompanied by an app which tracks air in real time.

Ultimately, awareness is the best weapon for battling air pollution so it’s important to stay aware and adjust your plans accordingly.