To support the increasing coverage of fixed broadband services, in September 2020, the Argentinean government announced the launch of a US$500 million (ARS37.9 billion) national connectivity plan, named “Plan Conectar” to improve access to broadband and digital TV services in the country. 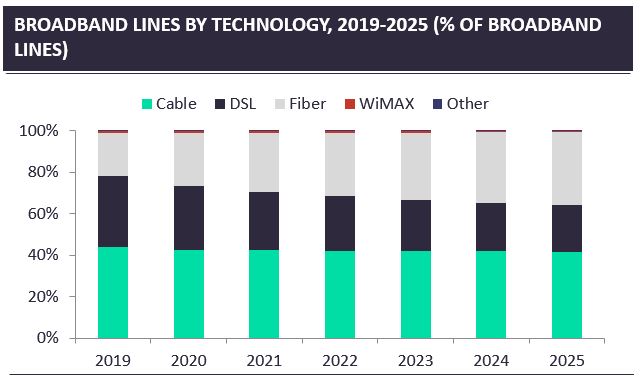 Fixed lines will increase from 8.6 million in 2020 to 10.1 million by 2025, driven by the government’s National Broadband Plan aimed at expanding broadband services to remote and untapped areas in the country. Meanwhile, fixed broadband penetration will grow from 18.9% in 2020 to 21.3% by 2025.

Cable subscriptions will account for a 42.5% share of the total fixed broadband lines in 2020 and will remain the leading technology through 2025. Fiber lines will increase at a CAGR of 10.0% to reach 3.6 million by 2025 supported by operators like Movistar Argentina investment in expanding fiber infrastructure to the new areas of the country.