The boss of UK fashion retailer Asos has revealed he hopes to ditch plastic and switch to reusable packaging.

In a conference call with analysts and reporters Asos chief executive Nick Beighton said he wants to replace plastic packaging with reusable bags that could be used for multiple deliveries.

However, he added that no timeline was set for the initiative’s roll-out:

You send it back to us and we send stuff back in the same bag.

I’ve got no specific targets I want to share but what I can say to you is this is something deeply personal to me and it’s shared by the Asos business.

The announcement came as Asos revealed its financial results for the first half of the year, with sales showing no sign of slowing

The fast-fashion leader for twenty-somethings recorded a rise in profit of 27% as retail sales climbed to £1.1 billion.

The rosy results come in the footsteps of a grim report on UK brick-and-mortar shop closures, revealing 5,855 UK outlets had shuttered in 2017 while 1,772 shops disappeared.

However, the Asos share price moved lower after the results announcement due to profits missing targets. 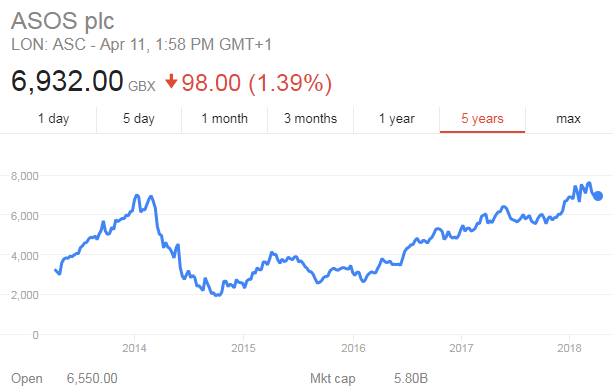 Beighton’s pledge to go green follows a string of UK retail giants who have introduced a ban on plastic bags after the government imposed a 5p levy in 2015.

Tesco scrapped its 5p charge on carriers in all its stores in August last year, while Sainsbury’s stopped selling single use bags in 2015.

Read more: Can you remove plastic packaging from the weekly shop? Here’s how some businesses are doing so

In March, Asda announced they would no longer sell plastic bags and would cut down on using plastic in own-brand packaging by 10% while Waitrose unveiled plans this week to ditch disposable cups.

In January, UK Prime Minister Theresa May announced that the ban on free plastic bags in stores would be enforced throughout UK shops, as those with under 250 employees were originally exempt.