Leisure stocks in airlines and hotels have fallen this morning in the aftermath of the Barcelona terror attacks.

Yesterday, a man drove a van into a crowd at Las Ramblas, one of Barcelona’s most popular tourist areas. So far, 13 people have died and dozens are injured.

In addition, Spanish police killed five suspects in order to prevent them from carrying out more attacks.

The Spanish Exchange Index, Ibex, is currently down 1.04 percent as well. 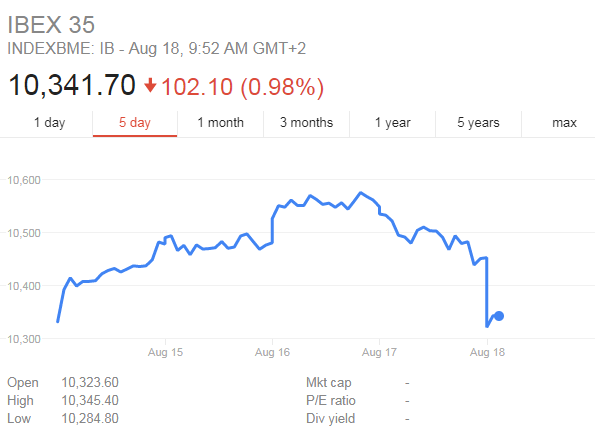 Airlines bore the brunt of a risk-off turn on the open, with shares in Ryanair, IAG, Air France KLM, Lufthansa, and EasyJet all slumping following the terror attacks in Spain. As we’ve seen over the last couple of years in Europe, these kinds of atrocities affect tourism and will hit airline earnings. Investors are concerned that demand will fall over the rest of the year, which was already looking like it would be a tough patch for the industry.

This has already been a difficult year for airlines. When British Airways was hit with a massive IT outage in May, IAG’s shares were down 4.0 percent, and its staff are currently gearing up for strikes over the UK bank holiday weekend next week.

In addition, Ryanair said it could cut fares as much as nine percent in July, causing concerns over a price war and shares to fall across the sector.

As well as affecting airlines, travel companies such as Thomas Cook, Tui and the Spanish hotel chain Melia have also seen their share prices fall in the wake of yesterday’s attack.

When terror attacks occur, consumers become fearful and stay away from busy tourist attractions, whether in the UK or abroad.

Merlin Entertainments, the company that owns some of the UK’s biggest tourist attractions including the London Eye and Madame Tussauds, said that demand for trips has been falling amongst domestic tourists as a result of the London and Manchester terror attacks that occurred earlier this year.