The price of bitcoin — the original and largest cryptocurrency — has slipped below $8,000 for the first time since early February as fears over increased regulation from governments and tech companies weigh on investors.

Yesterday South Korea’s regulator took control of three ‎cryptocurrency ‎exchanges in the country — it was reported by local outlet Yonhap — while there were reports that Japan is planning to use a G20 meeting next week to call for combined regulatory efforts to combat the use of cryptocurrencies in money laundering.

Both Japan and South Korea are big markets for cryptocurrencies, with huge trade volumes emerging in recent months.

Japan was the first country to adopt a national system to oversee cryptocurrency trading, although it carried out checks on several exchanges this year after the theft of $530 million from one exchange, Coincheck.

France and Germany have meanwhile said they will make joint proposals to regulate the bitcoin cryptocurrency market. 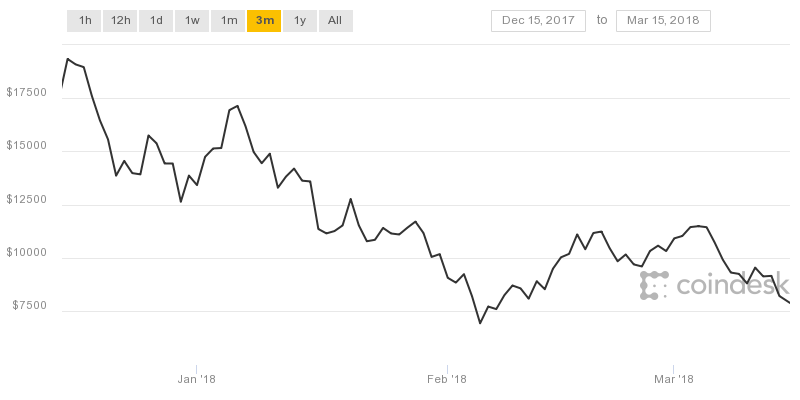 Increased government intervention in the cryptocurrency market comes alongside tech company crack downs on advertisements on their platforms.

The search giant said the ban will extend to all unregulated or speculative financial products, including binary options and financial spread betting. ICOs are a way to crowdfund using cryptocurrencies.

In a blog post Google said those offering these kinds of financial products “will be required to be certified by Google before they can advertise through AdWords”.