Cineworld stock received a huge boost in February 2018 thanks to news that the cinema chain completed a reverse takeover of US cinema group Regal Entertainment.

But if investors were already feeling confident, Cineworld’s latest results should provide even more reason for celebration. 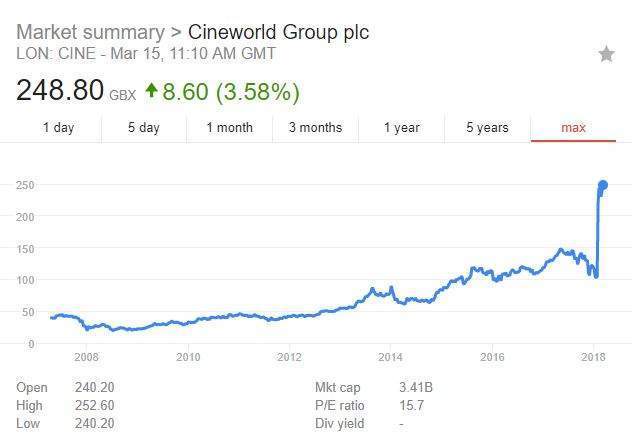 As of 2018, the Cineworld group has around 9,500 screens in 10 countries. Its acquisition of Regal Entertainment means that it now has screens in America, the world’s most lucrative market for film.

The results for the company were split into UK results and those for the rest of the world. Both give some interesting insight into cinema viewing habits in different parts of Cineworld’s business.

However, overall admissions have increased by 2.3%. According to the UK Cinema Association, admissions across the UK and Ireland were only up by 1.4% across the board. Cineworld puts this down to the successful film slate of 2017 as well as several newly opened locations.

In the UK and Ireland, Star Wars: The Last Jedi was not the biggest revenue driver.

Cineworld states the reason for this price rise was due to its offering premium viewing options in more locations as a part of a 2015 renovation programme. These include IMAX and 4DX offerings.

Refreshment sales were the second biggest source of revenue.

These accounted for 24.0% of total revenues in the UK and Ireland. People generally spent more per visit too. The retail spend per admission was up 4.4% on 2016. Cineworld counts the expansion of retail options for this success. They cite the five new Starbucks outlets opening in UK cinemas.

Finally, and perhaps most surprisingly for cinema-goers, all other streams of revenue, including cinema advertising accounted for 10.2% of Cineworld’s total revenue.

Cineworld reports similar trends for the rest of the world but with a few minor differences.

In the rest of the world, box office revenue was slightly less important, accounting for only 57% of total revenue. Admissions also increased in the rest of the world by 4.7%. Cineworld puts this down to success new cinema openings in Poland, Romania, Israel, and Slovakia. The growth in those economies was also a reason for success.

As with the UK and Ireland, average ticket prices did increase slightly due to Cineworld’s ‘premium offerings’.

Retail sales were also more important globally. It represents 25.8% of total revenues for Cineworld outside of the UK. Cineworld suggest this is due to three new VIP sites across Israel and Poland.

Advertising and other sources of revenue are more important for the rest of the world compared to the UK and Ireland. These additional streams account for 17.2% of total revenues for the rest of the world. This is put down to the success of Forum Film, the Cineworld Group’s distribution arm. It distributes films on behalf of major Hollywood studios and retains distribution rights for some independent movies.

Increased advertising revenue is cited as the source of success in the rest of the world. This was due to the increase in admissions.

In a statement accompanying the results, Cineworld said:

“On 5 December 2017 we announced the acquisition of the US based Regal Entertainment Group which was completed on 28 February 2018… Although a huge challenge, we as management are confident that we will successfully lead the Group to new achievements and deliver enhanced shareholder value. Through our success and experience in the UK and Israel we have learnt and proved that the potential in more mature markets is at least as attractive as in the emerging markets.

“The US is the biggest cinema market in the world and we are confident that this transformative acquisition will be a great success. Our objective is to provide the best content, in modern infrastructure with the great service which will ensure that our cinemas remain ‘The Best Way To Watch A Movie’.

“We have been pleased with the performance of the Group through the opening weeks of the year and we are encouraged by the strength of the film slate for 2018, which includes Jurassic World: Fallen Kingdom, Fantastic Beasts: The Crimes of Grindelwald, Avengers: Infinity War, The Incredibles 2, Mamma Mia! Here We Go Again, Solo: A Star Wars Story, Deadpool 2, Fifty Shades Freed, Mary Poppins Returns and many more. We look forward to another year of growth in shareholder value.”

2018 looks like it’s shaping up to be a successful year. The film slate is certainly nothing to be scoffed at.