Interest in the internet of things (IoT) is gaining momentum in the Africa and Middle East (AME) region. Stakeholders are exploring and identifying key areas of growth. This is encouraging given that IoT is still in its early stages of uptake throughout a number of verticals.

GlobalData predicts that the AME will be the second-fastest growing region for IoT revenue, only behind Asia-Pacific.  The utilities, government, and manufacturing verticals will be driving IoT revenue in the region, with the three having accounted for more than 50% of the total internet of things opportunites in 2018.

Going forward, the AME IoT market is forecasted to more than double by 2023, reaching over $20 billion.

Most expenditure will remain on the IoT software and services side. Internet of things devices will, however, be the fastest revenue growth segment. This is because costs are forecast to increase as edge computing is explored and adopted.

Connectivity will continue to account for the smallest share of the total IoT market opportunity, at around 13%-14%. 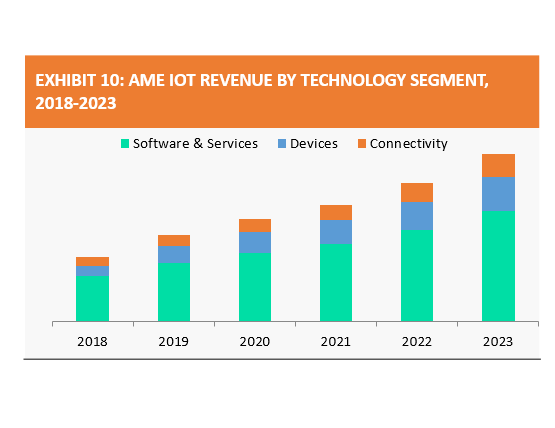 Internet of things is gaining traction in Africa and the Middle East.