During the Syrian crisis, people fleeing the conflict travelled to Turkey and on to Europe via the Greek islands. According to Norwegian Refugee Council (NRC) director of technology Pietro Galli, on landing, they’d ask two questions.

“The first one was ‘Have I reached Greece? Am I in the European Union, have I made it to safety?’ And the second was ‘Where can I access Wi-Fi?’” he says.

“Wi-Fi was their connection to the ones they’d left behind and to their peers who were undertaking a similar journey, and onwards to Germany and beyond. We’ve learned from their experience, so now we’re working in Colombia, providing them with hotspots and making information available so people can find their way and access services.”

Speaking at the recent Pluralsight LIVE conference in Salt Lake City, Utah, Galli told Verdict that the vast variation in the conditions in which NRC works in is a challenge in itself.

“We work in 31 countries, and of course the conflicts, the level of education, available infrastructure and mobile phone penetration varies,” he says.

“If you look at the Middle East or the Far East, like Myanmar, there’s a high penetration of mobile phones and you’ll see that refugees or displaced populations have that, invest in it. We can use it as an avenue for interaction or information. In Myanmar, we piggybacked on an existing antenatal platform for expectant mothers to push messages so we didn’t have to reinvent the wheel or a build new platform.

“In South America, we created an application where communities can alert each other to violence, and form peer groups where they can support each other. Africa is much more challenging, and the further you go inwards from the coast, connectivity becomes more and more scarce are more and more intermittent.”

Variation in technology availability affects NRC staff members too; when Galli started work with the NRC, staff members used radios and satellite communication, which they still have to in many of their offices.

“The challenge for our staff is often working online in the office but then having to go offline in the field. How do you create technology that can balance that? And then if you’re carrying data with you, what happens at checkpoints if your computer or phone gets stolen?”

GDPR and the Norwegian Refugee Council

As a European non-governmental organisation (NGO), NRC must comply with the General Data Protection Regulation (GDPR), but the sensitive nature of the data it holds makes it far more nuanced.

“The data we collect has to do with your location of origin, which can easily be associated to your ethnicity or your religious affiliation and, in many contexts, that’s actually a reason for persecution,” he explains.

“So if we lose data and it gets into the wrong hands, it’s not only a typical data breach where there’s a scandal, a fine, and embarrassment – it could mean life or death. So for the whole data value chain we assess is it necessary to collect this?  Could we do with less? Are we collecting stuff that could put people in danger? It goes all the way through to how you transport, store and delete it.”

Galli says there is also an imbalance of power in obtaining the data.

“We have worked consent into our processes. But if I’m asking your consent to collect your data and I’m actually the one holding the water or having the food, you’re going to feel compelled to give it to us.”

In many of the locations in which NRC works, identity itself is a problem.

“In the UK we work with DFID [Department for International Development] a lot. From one side we need to be compliant, accountable and transparent. On the other side, we have these ethical dilemmas in the field that we may cause harm. So we always strive for balance.”

To help manage the data it collects correctly and sensitively, NRC announced on 20 June, World Refugee Day, that it is partnering with Pluralsight One, the social enterprise arm of US online education company Pluralsight, to upskill staff and, in the longer term, train displaced people in IT skills that they can share with their communities.

Since the announcement, Galli says a small cohort of NRC staff have been introduced to the Pluralsight platform to see what is possible.

“We’re not going to go a big bang with 40,000 people at once, because we want to be able to manage it,” he says. “We’re going to create some courses of learning and pathways and share some ideas from the very top of the organisation. That can trickle down into regional, country, national and even potentially down into area offices.”

Pluralsight One chief impact office Lindsey Kneuven explains that the delivery will be targeted for the humanitarian audience.

“We’re working on structures for those courses that will be play-by-plays between humanitarian experts and our more traditional technologists and community of authors so that they can create courses that will be truly beneficial for these audiences,” she says. “Our Pluralsight learners become more informed about humanitarian work and our Pluralsight One learners really figure out how to bridge the content that is in our full library.” 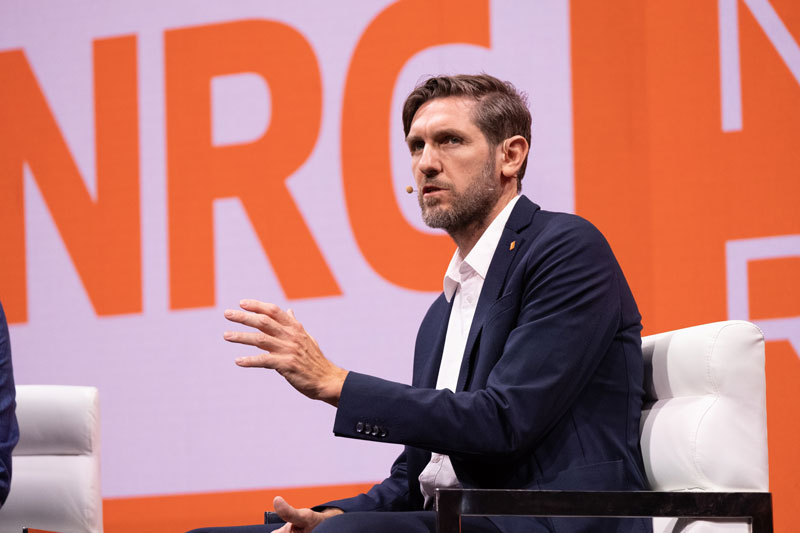 Putting technology into a humanitarian context

However, many of the existing courses and the examples they use are aimed squarely at the developed world environment any may not resonate with some NRC staff or learners, so NRC and Pluralsight are looking at producing short introductory courses that put them in a humanitarian context.

“We have to understand the technical opportunities there,” says Kneuven.

“When Pietro and I were in Mosul, every time you move, you have to fill out a logbook, and it’s very manual, with carbon copies. Then it gets taken an office for data entry, with the risk of introducing human error. We were sitting there in the car at a checkpoint saying we could digitise this in a minute. We’re now investing in understanding those opportunities that we could segment out and start to build in parallel as part of the broader transformation effort without impacting the urgent work we’re doing.”

Ultimately, it could be the technology industry’s people, not just its solutions, which make a long-term difference.

“At the conference today, somebody came up and said I was a refugee from a country in Southeast Asia. I came over to this country at the age of 10, I didn’t know a word of English. What you said resonates with me,” says Galli.

“I believe that in the tech community there’s a whole network of people that have this background that at we can connect to and leverage for awareness and engagement.”

Berenice is a senior editor within the Verdict group. You can reach her at berenice.baker@verdict.co.uk