Good morning and welcome to Tech Report Weekly 19 October. This week in tech marks the return of earnings season for the world’s technology companies, with IBM, Tesla, Netflix, Snapchat, Ericsson and Intel all reporting their latest financial results. On the events front, Dell Technologies World is going virtual to offer talks and breakout sessions on a wealth of technology topics. Elsewhere the UK’s Broadband and Road to 5G committee will quiz the government’s Minister for Digital Infrastructure over the progress made on the commitment to provide gigabit-capable broadband across the country by 2025.

In this week’s Spotlight, we take a deeper look at hybrid working after a number of developments in the past week have galvanised the idea. The Verdict team has also highlighted some of the top technology journalism we’ve been reading from around the web, as well as key quotes, news and features from our own reporting. If you’d like all of this sent straight to your inbox every Monday at 7am, subscribe here.

Why it matters: It’s all change at International Business Machine. On 8 October, the enterprise tech giant announced it will spin off its managed infrastructure services unit into a separate company, which for now is dubbed ‘NewCo’. The move is to allow IBM to be “laser-focused” on hybrid cloud and AI opportunities, said chief executive Arvind Krishna, who took the reins in April. Cutting its sluggish legacy IT business loose could provide a long-term boost to IBM’s sales and profits, which have seen poor growth this year due to the pandemic creating inconsistent levels of demand for big digital transformation projects.

In the previous quarter IBM’s results were mixed, with revenue down 5.4% year on year, but with strong sales growth in its cloud computing unit. In its preliminary estimates for its Q3 financials, IBM forecast earnings per share of $2.58 on revenue of $17.6bn. Wall Street expects adjusted earnings per share of $2.57, with revenue coming in at $17.62bn. Both estimates are down on IBM’s results from the year-ago period. While the latest earnings will demonstrate how effectively IBM has adapted to the coronavirus, analysts will be paying close attention for any updates on how the company plans to approach the spin-off.

How to follow it: IBM posts its Q3 results on Monday at 10pm BST. Here’s a link to the webcast, or you can visit Verdict.co.uk on Tuesday morning for our analysis.

Why it matters: As is commonplace now, the pandemic has forced Dell Technologies to ditch the Las Vegas expo hall to a virtual format for its flagship event. Despite this, Dell is offering an action-packed schedule of keynotes and breakout sessions. A range of experts from the tech and business world will share their knowledge on topics including the future of work, 5G, data protection and AI.

A slew of Dell heavyweights – from CEO, founder and chairman Michael Dell to CTO John Roese – will be speaking across the two-day event. Representatives from Verizon, Dell-owned VMware, FedEx, along with academics, will also be speaking at the conference. Dell Technologies will try to recapture some of the customary tech conference entertainment with a virtual performance from psychedelic soul-duo Black Pumas. Awkward living room conference dancing optional.

How to follow it: The event takes place Wednesday-Thursday. You can register to attend for free here.

Why it matters: 5G is perhaps the biggest buzzword in connectivity at the moment, but broadband remains the key technology powering businesses and keeping consumers connected at home. During the 2019 election campaign, Prime Minister Boris Johnson pledged to ensure every home and business in the country has full-fibre broadband by 2025. This was scaled down to delivering gigabit-capable broadband to all households by 2025, following industry scepticism over the timeframe. Broadband providers cited regulatory barriers to meeting this timeline, as well as concerns about the logistical challenges of digging up the ground to lay cables in remote areas when other technologies, such as 5G, could provide fast connectivity wirelessly.

The Broadband and Road to 5G inquiry, announced in March, was set up to consider these challenges and focus on how realistic the government’s goal is. This week the committee of MPS will quiz Minister for Digital Infrastructure Matt Warman. He will be asked to give an update on the progress made allocating the £5bn of fund public money designated to rolling out fast broadband to the hardest to reach properties, along with other barriers to deployment.

How to follow it: You can watch the session live on Parliament TV at 10am on Tuesday here, and visit verdict.co.uk for our coverage.

The virtual economy: How the pandemic has boosted the lucrative online world 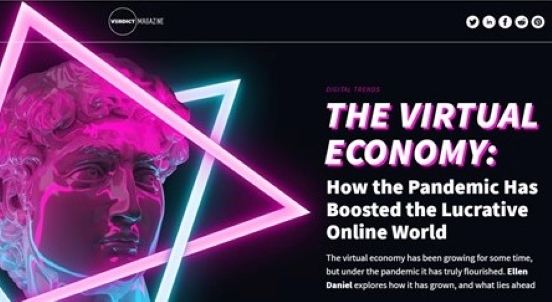 The virtual economy has been growing for some time but under the pandemic, it has truly flourished. Ellen Daniel explores how it has grown, and what lies ahead.

If you’re hoping to see your entire workforce return to the office next year, you may be in for a nasty shock. As many have increasingly suspected, the future of the workforce is almost certainly hybrid, with the majority of employees doing a mix of remote and in-office working, and some working remotely all of the time. This is unlikely to be news for many, but a number of developments in the past week have galvanised the idea. First is that in the UK, a survey found that working from home is so popular that 45% said they would take a pay cut to continue, while 41% said they would resign if they were forced to come back in full-time.

Meanwhile, video conferencing giant Zoom held its annual Zoomtopia conference. Naturally the company was keen to push the remote working narrative, with CEO Eric Yuan saying that “the future of work is a true hybrid”. This approach, he argues, balances the need for interaction and support with the better work-life balance a lack of commute provides, but also signals a need for effective tools to provide remote support. Zoom has profited immensely from this, so it is no surprise the company is keen to push this narrative, but they are also investing heavily in products that rely on long-term hybrid working – they truly believe this is the future for companies. These include app integration with Zoom, making it a core remote product for companies, as well as support for virtual events with platform OnZoom.

However, they are by no means alone. 80% of tech professionals believe the future of working is hybrid, and many employers are waking up to the benefit of reduced office costs and a workforce that – as it turns out – really can be trusted to work without in-person oversight. If you’re expecting a return to the pre-pandemic office, now is the time to reassess your plans.

Zoom CEO: The future of work is hybrid

“The office of the future will have a lot of robots, of course, and in the future, Zoom will allow me to enter into one of the robots. And as if I am the robot, I’ll able to navigate in the office.”

Behind the scenes on Artemis, NASA’s next Moon mission

For Wired Abigail Beall looks under the bonnet of NASA’s plan to put the first woman on the Moon.

‘Influencers are being taken advantage of’: the social media stars turning to unions

Amelia Tait explores how social media influencers are unionising in the engaging piece for The Guardian.