One bad apple spoils the barrel. That seems to be the case on Twitter, where account verification has been suspended following complaints over a number of white-supremacists having blue ticks next to their names.

The social media platform (or news platform, according to this Twitter employee) put all general verifications on pause yesterday.

A statement posted by Twitter Support stated that the meaning behind verification has been skewed. The company has insisted that Twitter verification was never supposed to become a status system or endorsement.

Platform co-founder Jack Dorsey has since said this on the matter:

We should’ve communicated faster on this (yesterday): our agents have been following our verification policy correctly, but we realized some time ago the system is broken and needs to be reconsidered. And we failed by not doing anything about it. Working now to fix faster. https://t.co/wVbfYJntHj

Perhaps verification wasn’t initially intended to indicate importance, but let’s not kid ourselves here. That little blue tick is the digital equivalent of a rare Rolex or Ferrari, reserved only for the rich and popular.

However, some have slipped through the verification net and will now have to live out their days as unverified, and therefore unimportant, nobodies.

However, that isn’t always the case. Defunct Twitter image host TwitPic (8.05m followers) and Twitter mobile app UberSocial (13.6m) have more followers than the Twitter founder himself (4.13m). Yet, both services are without a blue tick.

That might be down to various run-ins and lawsuits with the social media platform over copyright infringements. However, there is no excuse why these celebrity names remain unverified:

If far-right leaders are worthy, why isn’t chief remainer Gina Miller, the woman fighting to halt Brexit in the wake of Britain’s European Union referendum?

With just 23,300 followers, Miller doesn’t quite fit the bill in terms of numbers. However, as one of the biggest names in British politics at the moment, she certainly has the status.

At the very least, 436,000 people, including a number of Facebook executives and friends of the Facebook founder, believe @Finkd to be the real deal. However, Twitter doesn’t seem certain.

Grumpy Cat has a blue tick next to his name, so Twitter verification doesn’t exclude animals, despite their lack of typing ability. Therefore, it seems a little unfair that Twitter has forgotten these furry friends.

Jason Scott is a historian that works for the handy Internet Archive non-profit. He is also the man behind digital document preservation website textfiles.com. However, despite the great things that Scott has done for the internet, his cat, Sockington, has stolen the limelight. The cat is more popular than Grumpy Cat with 1.41m followers, but has yet to be verified.

Likewise, Larry the Cat has spent more time in 10 Downing Street than most UK politicians, but Twitter has yet to reward the Chief Mouser to the Cabinet for his service. With a number of impersonators trying to pass off at Larry, he seems like the perfect candidate for a blue tick… 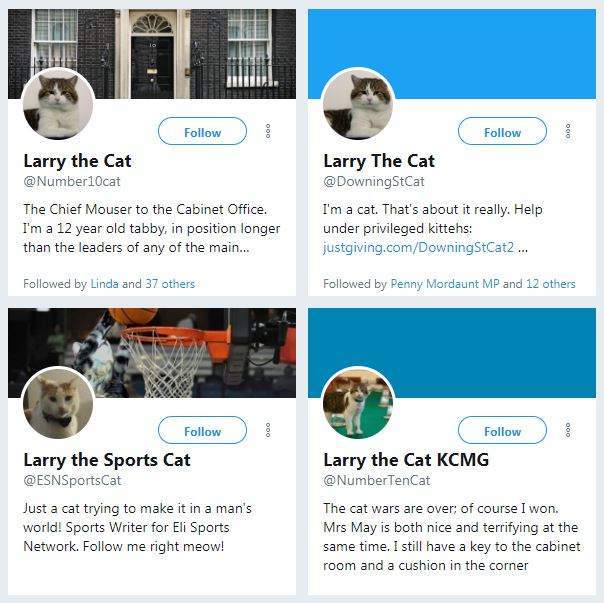 If there’s any Twitter account that deserves the noble blue tick status, it’s @VerdictUK. Yet, so far, it hasn’t come. It’s nothing short of an outrage. However, this incredible website is still well worth a follow.