As a sheet of white fell over the United Kingdom, people were told to brace for more yellow, amber and red weather.

The Met Office, the UK’s national weather service, issued these colour-coded warnings across the majority of the UK as the “Beast from the East”, a cold blast from Siberia, approached.

Temperatures fell below freezing and snow fell across the UK on Tuesday and Wednesday. Transport chaos ensued as roads, train lines and airports around the country were hit by closures as delays. The National Grid is struggling to supply homes with gas as Britain turns up the heating to keep the cold out. However, the worst is still yet to come.

With Storm Emma expected to bring more snow and wind in the coming days, the Met Office has issued the first red snow warning in over five years in parts of South West England.

The Met Office issues warnings when there is a chance that the weather could disrupt transport and services, or potentially pose a threat to property or life.

Warnings are issues for all types of weather, including rain, wind, ice and snow. Each warning comes with a colour to signal the expected level of disruption and danger.

Yellow warnings suggest a chance of severe weather which could potentially cause disruption to transport services. You should check before travelling and expect delays, but there is no major risk to your property or wellbeing.

A yellow warning is in place across all of the UK, including London and Manchester.

Amber warnings suggest that extreme weather is likely, which could potentially cause delays and closures on transport services. The Met Office warns that there is also some chance of power loss and danger to your property and wellbeing. You should be aware of the situation and ready to protect yourself should conditions worsen.

An amber warning is in place across much of the UK, from the Midlands up to Scotland, as well as much of the Republic of Ireland, Wales and South West England.

Red warnings suggest that extreme weather is expected. Plans should be made in advance to protect yourself from the dangerous conditions, as risk to life is high. Likewise, power outages and travel delays should also be expected.

A red warning is in place in a small part of South West England and Wales, including Newport, Cardiff, Weston-Super-Mare, Taunton and Exeter. 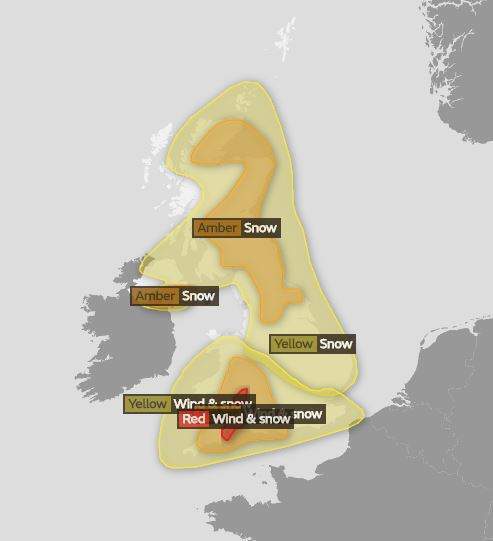 When have the weather warnings been used before?

The Met Office issues yellow warnings fairly often, particularly further north where temperatures are close to zero degrees celcius for much of the winter.

The UK has already seen widespread yellow warnings this year. Temperatures as low as -5.6 degrees were recorded last month, with the entirety of England, Scotland and Wales told to brace for snow and ice.

On that occasion, the Met Office warned of icy conditions and some snowfall which could cause disruption to travel. Busy roads, such as the M20 and M5, were closed as collisions occurred due to ice and snow. As many as 70 flights set to leave Heathrow Airport were cancelled and schools were shut across the country.

However, amber and red warnings are less common.

Large parts of the South East and North are currently on an amber alert, with more snow and wind expected to hit. This morning alone more than 750 flights have been grounded across the UK, with that number likely to climb throughout the day.

Many train services have been cancelled and those that are running experiencing disruption and delays.

The cold weather is reportedly putting a strain on the National Health Service, with staff working around the clock to tend to a backlog of patients.

What can the South West expect tomorrow?

However, the worst is yet to come for places like Exeter, Cardiff and Newport, where the Met Office has issued a red warning for snow for the first time since January 2013.

On that occasion, those in Heads of the Valleys and Brecon Beacons were told to brace for extreme snowfall of up to 30cm. More than 10,000 homes were left without power as the blizzard hit. With roads unmanageable, energy companies were unable to get engineers out to fix faults. This meant that more than half of those homes were left without heating the following day.

While Wales was worst hit, Scotland and England were also affected. More than 3,000 schools were closed due to the weather and transport services ground to a halt. Airports such as Birmingham, Cardiff, Bristol and Southampton were closed and over 240 flights failed to leave Heathrow, the UK’s busiest airport.

Emergency services were stretched to their limits and roads were forced to shut due to collisions. The AA were reportedly notified of 900 incidents an hour during the extreme conditions.

However, things could be worse. While the Met Office hadn’t yet started issuing colour warnings, the winter of 1962 would have had a fair few. On that occasion, a cold snap settled in the UK for four months between December 1962 and March 1963.

Travelling was impossible for long periods as roads, train lines and airports suffered from the freezing temperatures. Likewise, food prices climbed by as much as 30%.

How much does snow cost the UK?

According to RSA, restaurants and bars take the worst hit. This is due to customers and workers choosing to stay at home, as well as a lack of supplies due to the jammed transport networks.