Veganism is the fastest growing lifestyle movement of all time. In Britain alone, one in every 100 people over the age of 15 now follows a vegan diet. However, meat is still holding many others back.

A recent study found that 81 percent of meat-eaters are put off veganism because they “like the taste of meat too much”, while 50 percent feel that they would “struggle for meal ideas”.

However, cutting out animal products doesn’t have to mean drastically changing your diet.

Many believe that a vegan diet is one of only veggies and nuts, but that isn’t the case.

Vegans have their own milk, cheese and meat. You can even tuck into a hard-boiled egg if you wish to.

But best of all is vegan junk food, which allows you to eat all of the unhealthy things that you love in a healthier way.

As gross as McDonald’s food might be, everyone craves a greasy Quarter Pounder every now and then.

Rather than breaking your animal-free lifestyle, you can now tuck into an Impossible Burger.

Available in Impossible Foods restaurants in the United States, Impossible Burgers look, taste and feel just like the real thing. However, there is one key difference – is made from wheat, coconut oil, potatoes and heme, rather than beef.

Many takeaway restaurants already use fake cheese – one in four were found to be doing so in a recent study. However, Pizza Hut has announced that they will be offering actual vegan friendly pizzas later this year.

The chain restaurant will be trialing vegan cheese in five places around the United Kingdom. They hope to eventually bring vegan options to all of their locations.

Heck, even a fry-up isn’t off the menu.

Soy Division, a small eatery in Glasgow, Scotland, creates vegan alternatives of all of your favourite café classics, including soy bacon and sausages.

Likewise, What the Pitta!, located in London, has been hard at work creating a vegan version of the post-night out snack, the doner kebab.

Once you’ve finished your vegan friendly meat meal, you can now wash it down with some almond milk Baileys, or better yet, a tub of Ben & Jerry’s non-diary ice cream.

Labelled vegan products are all the rage. However, there are plenty of non-labelled food products that you can still enjoy, safe in the knowledge that they haven’t come from an animal. 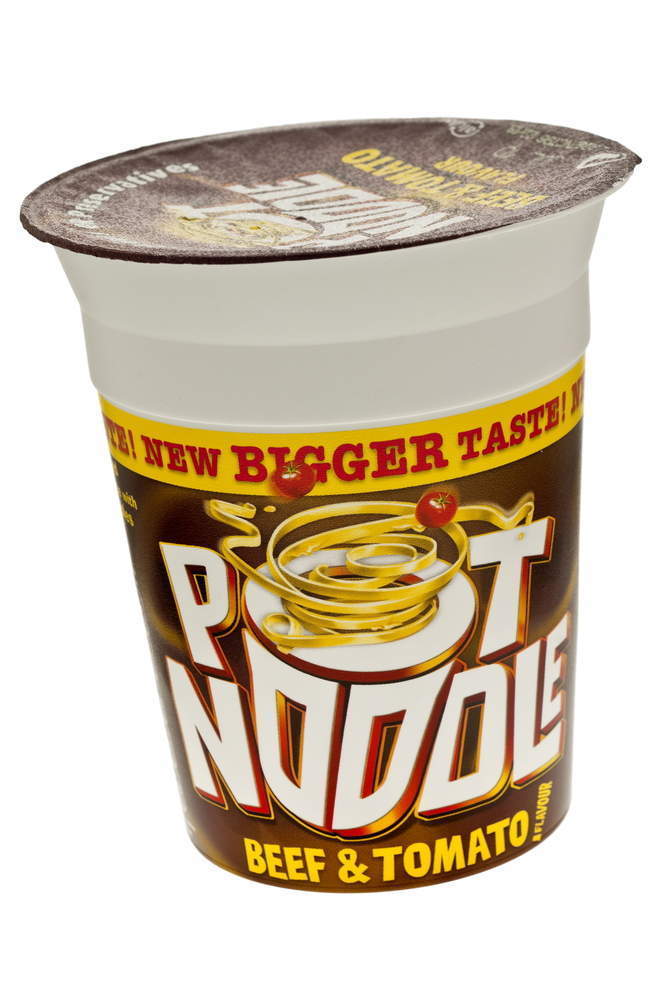 Surprisingly, Pot Noodle isn’t off the menu. And we’re not just talking about the veggie kind.

Bombay Bad Boy and Sweet & Sour can be enjoyed safely. Somehow, so too can the Beef & Tomato and Southern Fried Chicken flavours.

While a large number of sweets are made using gelatine, a mixture made by boiling the parts of animals that meat-eaters don’t want, there are still some sweet treats that you can tuck into.

Both Rowntrees’ Jelly Tots and Tooty Frooties are vegan friendly, as too are Starburst (but only in the UK), Millions and Skittles.

While this isn’t a complete guide – you can probably find a vegan alternative for just about anything if you try hard enough – it does show just how much choice you have, even if you decide to give up meat.

Don’t let the taste and convenience of junk food stop you from going vegan. You can continue to be just as unhealthy as you already are regardless.

Topics in this article: Vegan