A rare Macworld magazine signed by deceased Apple founder and former CEO Steve Jobs will go up for auction today.

The Macworld #1 issue, published in February 1984, depicts a young Jobs posing with three Macintosh computers. The magazine remains in good condition, with some light edge wear, and is signed on the front cover in black ink with “To Matt, Steven Jobs”. 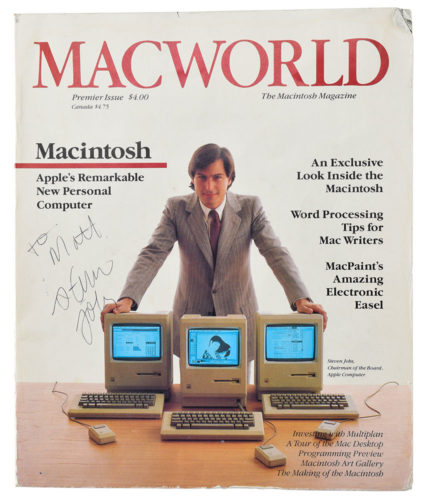 Signed at the grand opening of the Fifth Avenue Apple Store in 2006, complete with a video of Jobs marking his signature, this is an incredibly rare piece of Apple memorabilia.

The item – which comes with a full letter of authenticity – has been given an estimated value of $10,000 by Boston-based auction house RR Auction, who will be conducting the sale.

Bidding will open today, with the auction set to reach its conclusion in one week, on Thursday, 13 December.

The auction will also feature one of Steve Job’s old business cards, which lists him as “Steven P. Jobs, Chairman of the Board”. A copy of iWoz: Computer Geek to Cult Icon, signed by its author and Jobs’ fellow Apple co-founder Steve Wozniak, is also up for grabs.

These are just some of the items included in a haul of more than 300 science & technology items that will be sold by RR Auctions this week. The auction also includes the 1924 Nobel Prize, given to Swedish physicist Manne Siegbahn for his research on X-rays, as well as a prototype lunar boot designed for Neil Armstrong to wear while walking on the Moon.

The death of the Apple co-founder in 2011 has certainly added an extra zero to the value of any Steve Jobs memorabilia.

Items that have gone under the hammer since include a high school yearbook that fetched $12,300, a $42,500 Seiko watch that went for more than $40,000 above its initial estimate, as well as Apple’s first business contract, which fetched $1.6m.

A 1985 Newsweek cover signed by the tech founder, similar to the item up for sale this week, fetched $50,600 last year.

If history is anything to go by, the owner of the Macworld magazine can expect a little extra on that $10,000 estimate.