When the European Commission slapped Google with a €2.4bn ($2.7bn) fine for giving priority placement in search results to its own shopping service, it set a precedent other tech giants need to pay attention to.

The fine — which could rise if Google doesn’t change up its practices — is a sign of Google’s continued growing pains as a company, despite its financial maturity.

The company’s increasing global prominence and different national and regional visions of what’s allowed in the world of digital services means it is taking Google a long time to figure out its place in the world.

By a large margin, this was the largest antitrust fine levied by the European Union.

But, when looking at the breadth of major anti-trust and cartel fines over the last decade, a larger story emerges. 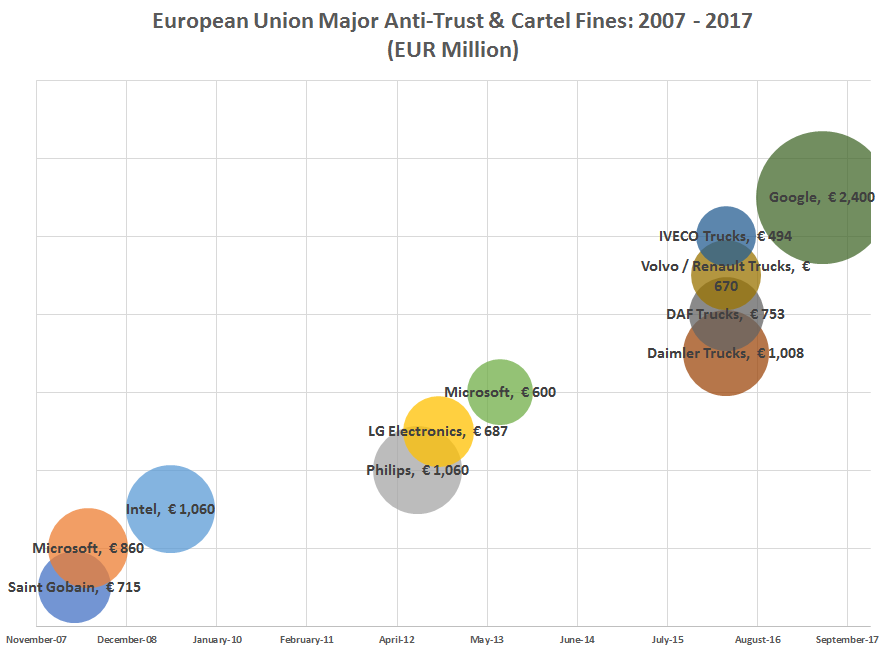 According to the EU’s own figures, software now represents the single largest sector for cartel and anti-trust fines over the last decade.

Software is eating the world.

And as software companies play a larger role in the economy and our daily lives, it’s only natural that they find themselves pulled into more and more regulatory investigations… and fines.

And yet, the growing prominence of tech giant software in our daily lives means that the relevance of the EU’s largest anti-trust fine stretches well beyond Google and is likely a sign of things to come.

Where the fine on Google has been labelled a precedent, the suggestion is that Google won’t be alone in facing scrutiny and that innovation which succeeds to the point of market dominance will be penalised.

Perhaps more worrying, this isn’t necessarily a long-term concern that Silicon Valley innovators have years to plan around.

Google isn’t the only software giant under the EU regulatory magnifying glass and talk of a precedent could just as well be aimed at other players in the software and application space.

This may be the start of a period where EU regulators focus on software innovation must be something companies begin planning for.