Risks threatening the world are accelerating but global leaders now have a “golden opportunity” to address problems. That’s the message from the World Economic Forum (WEF) today ahead of its big meeting in Davos, Switzerland, next week.

However, environmental risks dominate the WEF’s Global Risk Perception Survey for the second year running; with 59 percent of almost 1,000 global experts and decision-makers saying risk trajectories are going to rise this year.

The WEF’s global risk report warns that world leaders are struggling to keep up with the accelerating pace of change despite an improving economic backdrop.

The release of the report sets the tone for the World Economic Forum’s annual meeting in Davos, with this year’s event theme Creating a Shared Future in a Fractured World.

The current global political landscape has been blamed by survey respondents for the pessimistic outlook this year, with 93 percent of saying they expect political or economic confrontations between major powers to worsen.

Around 80 percent expect an increase in risks associated with war involving major powers.

US president Donald Trump caused a stir when his administration revealed earlier this month he would be attending — while German chancellor Angela Merkel might also be there, potentially setting up a showdown between Trump and the world’s globalist political establishment.

Read more: Here’s who’s off to Davos this year

Klaus Schwab, founder and executive chairman of the WEF, said:

A widening economic recovery presents us with an opportunity that we cannot afford to squander, to tackle the fractures that we have allowed to weaken the world’s institutions, societies and environment.

We must take seriously the risk of a global systems breakdown. Together we have the resources and the new scientific and technological knowledge to prevent this. Above all, the challenge is to find the will and momentum to work together for a shared future.

Among the 30 global risks the experts were asked to prioritise in terms of likelihood and impact, all five environmental risks – extreme weather; biodiversity loss and ecosystem collapse; major natural disasters; man-made environmental disasters; and failure of climate-change mitigation and adaptation – were ranked highly on both dimensions.

Extreme weather events were seen as the single most prominent risk.

Read more: The Doomsday Clock — what will it tell us about life in 2018? 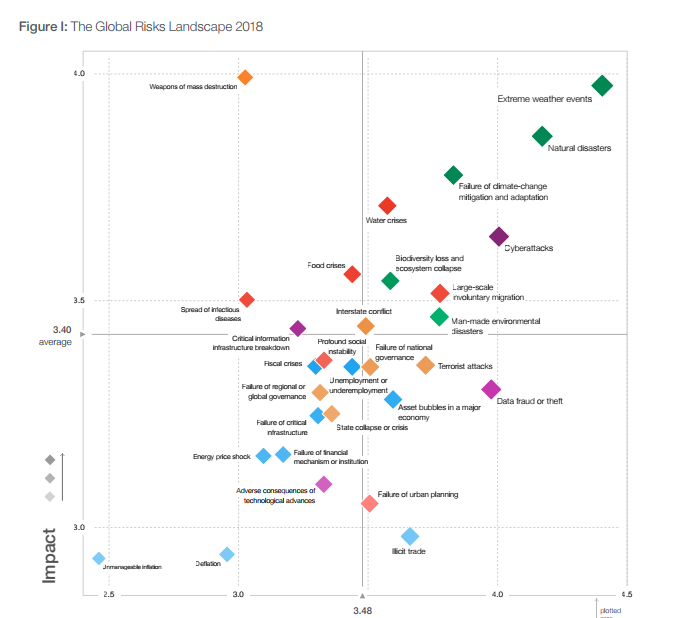 Meanwhile, cyber threats are growing in prominence, with large-scale cyber attacks now ranked third in terms of likelihood, while rising cyber-dependency is ranked as the second most significant driver shaping the global risks landscape over the next 10 years.

Geopolitical friction is contributing to a surge in the scale and sophistication of cyber attacks. At the same time cyber exposure is growing as firms are becoming more dependent on technology.

While cyber risk management is improving, business and government need to invest far more in resilience efforts if we are to prevent the same bulging ‘protection’ gap between economic and insured losses that we see for natural catastrophes.

Economic risks, on the other hand, feature less prominently this year, leading some experts to worry that the improvement in global GDP growth rates may lead to complacency about persistent structural risks in the global economic and financial systems.

Despite this inequality is ranked third among the underlying risk drivers.

In order to combat this the WEF has proposed a so-called alternative to GDP to measure how inclusive the growth model of countries around the world is.

This will be unveiled next week during the Davos meeting.