Another powerful male business leader has stepped down over allegations of inappropriate behaviour at work. The man in question is the boss of Canadian women’s clothing company Lululemon Laurent Potdevin. The former chief executive stood down effective immediately on Monday 5 February.

The reasons for his departure are not fully known but he said he fell short of the company’s code of conduct.

Potdevin became Lululemon’s CEO in 2014 and is the latest in a string of senior board members to depart the company. The previous CEO, Christine Day, left the company citing personal reasons.

Lululemon’s founder Chip Wilson resigned as chairman in 2015 after sparking fury when he suggested some women’s bodies were not suitable for Lululemon’s clothing.

Despite leaving the company, Potdevin will continue to receive pay well into 2019. He is being given $3.35m in cash now and a further $1.65m over a period of 18 months in monthly instalments.

In a statement about Potdevin’s departure the company noted:

Lululemon expects all employees to exemplify the highest levels of integrity and respect for one another, and Mr Potdevin fell short of these standards of conduct.

It did not reveal the exact nature of Potdevin’s transgressions but an employee familiar with the situation told the Standard it was not a single incident but a “range of instances”.

During his tenure, Mr. Potdevin oversaw the steady expansion of Lululemon through both calm and rough periods in the athleisure market. His innovative approach and his clear sense of Lululemon’s values and essence is one of the reasons the company has enjoyed continued success, even while other sporting goods brands struggle to generate growth.

He was brought on board to steady the company ship after thousands of pairs of yoga pants were returned after customers complained they were too sheer, costing the company millions and knocking the company’s stock.

While Potdevin’s success in the role has been reflected in Lululemon’s increasing share price, his departure has sent shares lower.

Lululemon’s investors seem unimpressed with the news around Potdevin’s departure. After the announcement, the company’s shares fell by 1.54 percent closing at $77.41.

However, the price fell further during after-hours, down 3.1 percent. 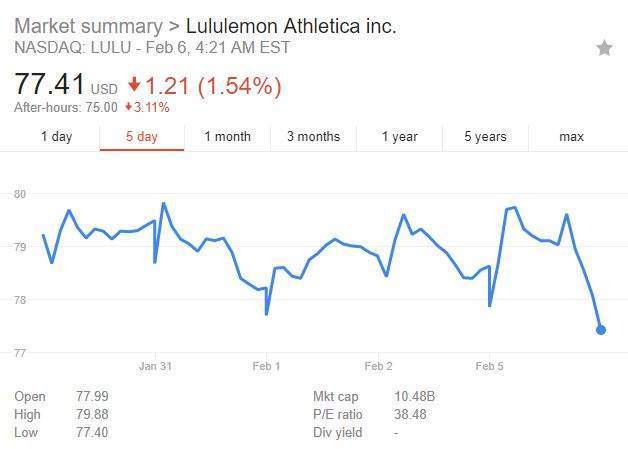 Potdevin’s departurethe latest in a long string of cases where leaders from business, politics and creative industries have faced consequences of inappropriate conduct.

Most recently, a Financial Times investigation implicated business leaders in a sexual misconduct scandal relating to a charity dinner.

While no business leaders lost their jobs as a result of that scandal many have been forced to explain their attendance.

Uber was forced to start an investigation when engineer Susan Fowler wrote a blog post detailing her experiences of sexual harassment at the company.

Sexual power imbalance in the workplace has become an increasingly contentious issue.

It was the subject of numerous discussions at the World Economic Forum in Davos this year.

One debate was focused entirely on the subject of why men sexually harass women in the workplace.